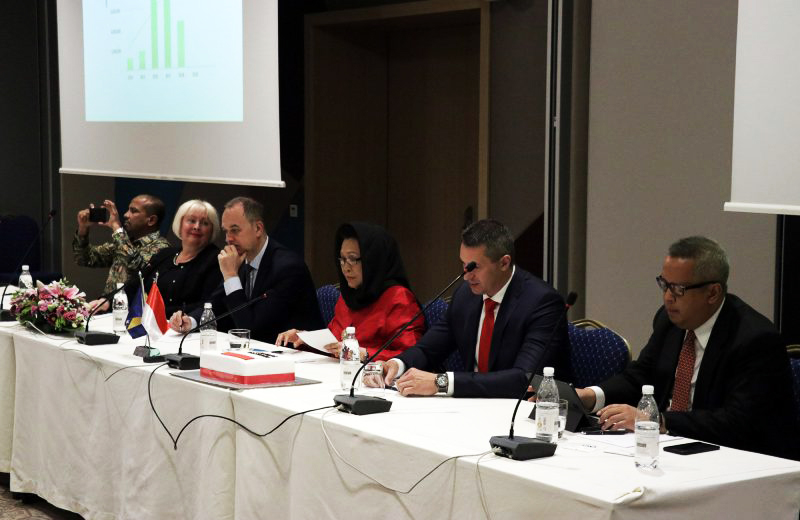 On April 25th, The Embassy of the Republic of Indonesia in Bosnia and Herzegovina organized the third gathering of business people and companies from this country as an opportunity for a better economic connecting between Indonesia and BiH.

Indonesia is a distant country, but this should not be an obstacle to the increase in trade, since BiH and Indonesia have been two friendly since the establishment of bilateral relations.

Although BiH imports coconut, cinnamon and palm oil from Indonesia and exports products to military industries such as weapons and ammunition, the two countries still cannot say that they have a major trade exchange, but encounters like this one are opportunity for further connecting.

Ambassador of the Republic of Indonesia to BiH, Amelia Achmad Yani, after organizing two previous business matching events, said that cooperation between the two countries is getting better and records steady growth.

“What we achieved through earlier events of this type is the increased number of tourists coming to BiH. Before that, there was fear among the people in Indonesia because of the war in BiH, but now they have a completely different image of BiH. Therefore, tourism, education and trade are the most important areas which we have to work on,” underlined Achmad Yani.

Part of today’s business matching event was also a meeting for government officials and business people from both countries, a one-to-one business meeting that took place as well.

We had a chance to present the company and our products to Indonesian business people. During the one on one meetings, large number of companies had shown great interest for the products. We are very happy for having a chance to get to know more about the Indonesia requirements and we are looking forward to our expansion on this market.

of Bosnia and Herzegovina